Twickenham Stadium in London is the home of Rugby England. In the early hours of this morning (Australian time), 82,000 spectators watched from the stands at Twickenham as New Zealand’s All Blacks thrashed Australia’s Wallabies, 34 points to 17 in the Rugby World Cup. According to my research, the cheapest tickets to this game sold for around AU$700, and some for as much as AU$56,000. For a single ticket. At a live game of rugby.

For my still-in-Cambodian-mode-brain, it is anyway.

One of the star All Blacks is 30 year old Sonny Bill Williams, a dual New Zealand – Samoan citizen who, interestingly, converted to Islam in 2008.  As the All Blacks celebrated their win with a lap of honour, a 14yo fan broke onto the pitch from the stands, apparently seeking autographs. Security immediately tackled him to the ground in front of Sonny Bill Williams, who admonished the security guard and dragged the boy back to his feet. Incredibly, he then draped his ribboned gold medal around the boy’s neck before walking him back to his mother in the stands! Williams has been quoted as saying “I kind of felt sorry for him. It will be a night that he remembers, hopefully”, “For a kid to have that will and take that risk, you deserve a medal. Enjoy bro” and “Better (for the medal) to be hanging around his neck than mine”.

Williams is becoming known for his off-field generosity, most recently offering his semi-final Rugby World tickets to Syrian refugees last week.  After the semi-final when his team won against South Africa’s Springbok team, he hugged and consoled a devastated opponent. Media reports are lauding him for his kindness and compassion with statements such as “Sonny Bill does it again”. One Twitter fan said “Always be yourself. Unless you can be Sonny Bill Williams. Then, always be Sonny Bill Williams”.  I concur!  His behaviour represents the epitome of good sportsmanship.  In 2011 he gave NZ$100,000 to the Christchurch earthquake appeal.  In 2012 he shaved his head in a fundraiser for Leukaemia and Blood Cancer NZ’s Shave for a Cure. 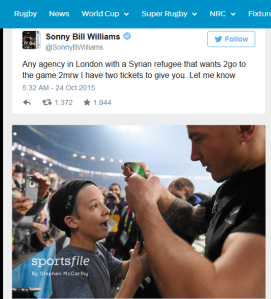 Perhaps what makes him so “real” is the fact that as a young man he made a lot of widely publicised mistakes.  He has said that the things he did wrong in the past have helped mould him into the man he is today.  We could all learn a lesson there.  If Williams can be so generous to the people and causes he knows about, imagine the kindness and generosity he is capable of, if he were to connect with the poorer world where the need for his compassion and heart is greatest.  With Samoan connections he probably already gives to at least one third world country.  I hold great hopes for his future as a philanthropist!

Anyway, I’m back at home in Australia and things are so far going well.  After two years away it’s fun catching up with friends and neighbours, sorting out my long-suffering garden, and of course getting into some serious unpacking.  That is the biggest challenge.  Before pulling into the driveway at home I was full of plans to downsize entirely and have a huge garage sale, all proceeds to go to Cause Cambodia.

That plan is slowly dissolving into a threatened dream as I slowly realise how captive I am to western trappings!  I remain fully aware of the fact that most of the world can carry their bed around with them, and all of their belongings to boot, held against their body with a krama scarfe for the Cambodians I know.  Most Cambodians have no, or very little furniture.  I on the other hand have a house filled with untold seats and surfaces of all kinds.  I arrived in town lugging two large suitcases, one small suitcase and my rather sizeable handbag.  Greeting me were no less than seven boxes which had been posted, mainly by myself, to myself, from various locations around the globe in the past six months or so, as I took advantage of first world postal systems in Europe and America to offload things I felt I couldn’t discard.  Determined to learn how to travel light, I am never letting myself travel so extravagantly ever again, especially as many of the things I thought I “needed”, didn’t leave the safety of their suitcase.

Since arriving home, things which are not necessary for my survival and which I have not even missed in two years away, have started to creep inside the house, from the shed where they’ve been in storage for years.  How quickly we revert to old habits, regardless of all good intentions to change!  This coming from someone who once considered herself a minimalist.  I said this to a friend yesterday, who reminded me that I actually was a minimalist until I bought my own home in 2007.  Prior to that I once moved house in my pyjamas one Saturday morning, with everything I owned sitting on top of my bed which I wheeled down the road to the next rented room.  Things have changed somewhat since then and I feel ensnared by my not-so-minimalist existence.  But I hope that my aspirations towards minimalism and continuing to help Cambodia and East Timor, will help me to creep those sneaky belongings back out to the shed in preparation for a downsizing sale.

My hope for the world, is that more people aspire towards the heart of Sonny Bill Williams.  In that vain, the lessons of my last two years away will be wasted if I don’t remain connected to what I now consider to be “the real world”, where food in your stomach each and everyday is a priority endeavour.  Today I connected with Cambodia via Chom who was bringing his family home from their grandmother’s village.  They paid someone $2 to push the tuk tuk up a very long and steep incline which saved them from taking a very rough and slippery route home.  As I unpacked no less than four pink dresses all rather similar to each other, into my wardrobe, I wondered at why I need all these unnecessary clothes when people in the parallel universe of rural Cambodia have to push a tuk tuk uphill to earn their day’s food?  There seems no point whatsoever to me, to be a “have” and to keep it for myself, in boxes I don’t need to look at between one year and the next, or suitcases I cart around filled with unnecessary dead weight.

In short, I think noone got it more right than Nelson Mandela, when you thread three of his best quotes together into one sentiment:

abject poverty demeans us all and makes the freedom of us all less meaningful; while poverty persists there is no true freedom; the purpose of freedom is to create it for others.

5 thoughts on “Hello From The Other Side”