Although my European holiday is wonderful, I miss Cambodia very much.  Everything I do here is coloured by questions as to whether this is the best use of my time and money.  As one example of many, today the landmine victim who I support messaged me to say hello.  He mentioned in his limited English (although far less limited than my Khmer!), that the very important Khmer New Year holiday is approaching.  I asked if he was going away and was told no, because his tourist-reliant income is currently non existent due to the Hot Season, also the low season for tourists.  The bus ticket to his home town is “too expensive”.  Knowing what I do about bus travel in Cambodia, this would not be more than $5 per person.  But with a wife and two children, it is beyond his budget to purchase four tickets.

The juxtaposition of my expensive international wayfaring against the many examples I now know so intimately, of inexpensive yet unaffordable aspirations, is with me like a travel companion, whispering reminders into my ear almost constantly.  I have an English wedding to attend at the end of May, so I am forcing myself to stay until then.  Not that it is difficult to be here, catching up with old friends, revisiting my old stomping grounds, sightseeing and experiencing Europe in Spring.  Despite my whispering travelmate, I am actually having a great time!

In the past few days Khmer friends have written to me about a young boy whose story is share-worthy.  He is 7 years old, HIV positive and recently diagnosed with Multi-Drug Resistant Tuberculosis (MDRTB).  Both diseases were contracted from his mother who is now dying.  His father abandoned the family, including two HIV negative siblings, some time ago.  Abandonment by an HIV- parent is not especially uncommon, due to the heavy stigma HIV carries with it.  The family have been living in dire conditions with daily food shortages.  Despite chronic malnutrition and his HIV-TB coinfection this boy is otherwise in good health and reportedly very smart.  His siblings were recently accepted into an orphanage who rejected their brother due to his HIV status.

The boy is currently with his mother who is now bedridden, unable to sit up independently and dying of what we call AIDS.  World Health Organisation definitions of Acquired Immune Deficiency Syndrome are complicated, depending on a variety of factors.  In short, anyone with Human Immune Deficiency Virus in their blood, who develops an AIDS-defining illness, the most common of which is Tuberculosis, is considered to have AIDS.  HIV kills 1.5 million people annually, making it the biggest infectious killer worldwide.  Coming a close second, TB kills only slightly fewer people globally.  The two diseases work in partnership with each other very efficiently.  Exposure to both micro-organisms is more likely to occur if you are living in poverty, with conditions such as overcrowding, high stress, low health literacy, lack of lifestyle choices, and other factors which decrease your power and increase your vulnerability.

Exposure alone does not guarantee that you will become unwell from either disease and other factors come in to play for illness to take hold.  The infectious dose of each micro-organism plays an important role.  If you are not exposed to a high enough dose, it will not affect you.  This is why both organisms, despite their relatively high infectivity, do not infect everyone who comes into contact with them.  Physical conditions including malnutrition, ailments such as chronic disease, psychological stress, smoking and many other factors which are too complicated to explain here, also affect your chances of becoming unwell once you have been infected.  The conditions which increase risk of disease tend to occur much more frequently in the poor world where people are already struggling to survive in challenging circumstances.  Explaining these circumstances to friends in the rich world is an almost futile exercise as it is literally not possible, living in even ordinary privilege, to envision such poverty and powerlessness.  It is equally impossible in a place like Cambodia, to accurately portray life in a country where hunger does not exist.  I regularly sense when I am with Cambodian villagers, an element of “unfathomability” about who I am, where I come from and how I got to be there.

In the past few days the boy has commenced his 20 month treatment regime, including eight months of daily injections, for MDRTB.  His mother also admitted to staff that she knew he had HIV and has been sharing her anti-retroviral medications with him. With different doses required and many other considerations, this is unsafe, indicating someone with very low health literacy.  It also suggests, as is so often the case in Cambodia, that she has little trust in the health care system.  This lack of trust is justified.  The public health system is poorly resourced, poorly coordinated, expensive to the point of overburdening a large portion of the population with chronic debt, and prone to corruption.

In the words of the Khmer doctor treating this young boy, who is trying to find him a home before his mother dies, “I feel depress to learn his poor life“.  A Khmer friend replied to me on Facebook this morning, after I requested translation of a Khmer post depicting a photograph of a visibly distressed, elderly street seller in Phnom Penh.  “Helen it is happened in Cambodia.  It says, if some body know this guy please contact me because there are some people will support him.  Thank. For me it is very usual in my country.  Alot of people got difficulties“.  These communications about such extreme hardship remain alien and distressing to me.  The distress exists for my Khmer friends too, whilst such things are also common and familiar to their life experience.

It’s easy to assume that people in the poor world don’t have the same feelings of grief and distress as us, about the hardship and destitution which they know so well.  During my last days in Phnom Penh this incorrect assumption was highlighted to me with Dara.  He and his mother were hospitalised while I was there and I saw them a number of times.  One day I picked them up in a tuk tuk and we went out for a day trip.  I took them to a hotel with a 9th floor rooftop bar overlooking the Mekong.  Dara had never experienced an elevator before and he did not know what was happening as the electronic doors opened and we coaxed him to enter the tiny little room.  His excitement when the doors opened onto a different level was hilarious, and equalled his excitement at being so high above the city.  From there we had a $2pp lunch at a Khmer restaurant before visiting the beautiful Royal Palace.  His mother has lived in Phnom Penh and was on the construction team who built the city’s tallest skyscraper (there are only two!).  But she had never been to a riverside hotel or to the Royal Palace and on her keypad mobile took many more photographs than me that day.

Many people approach Dara to ask about his amputation, particularly when he is not wearing his prosthesis and on our day out he was on crutches with his stump still sutured and healing.  At the Royal Palace a young Khmer woman spoke at length with his mother and I gathered from my limited Khmer that they were talking about his leg.  The woman then approached me to say that she was “so pity for him”, that she has children of her own and that “life is so difficult for him in the future in Cambodia”.  As she spoke tears welled in her eyes.

Some of the most powerful images you’ll ever see, by photojournalist James Nachtewy, depicting MDRTB patients from around the world, are in this link.  “Struggle to Live – the fight against TB”.

After seeing this slideshow of Nachtwey’s photographs I found a 20 minute TED talk by him which is also very powerful.  He talks of bearing witness, of good people being placed in very bad situations, of the desire to show people what is going on because the general public’s influence and opinions matter.  He says that photographers aim their pictures at our best instincts – being generosity, a sense of right and wrong, an ability and willingness to identify with others and a refusal to accept the unacceptable.  I liked these words as they describe my motivation for this blog.  This is my attempt at bearing witness to the injustices in this world and to the fact that we can act to address these injustices.

Three days ago I took the below photograph of a housing estate in South-East London, from the train window.  When I lived in London 25 years ago I travelled past this estate twice a day.  As the buildings came into sight on Monday I wondered how many residents were still living there 25 years later and realised that this is poverty, London-style.  Whilst the poor in rich countries do not starve and do have back ups such as first world quality health systems and welfare payments, they do also have struggles and challenges.  They are not highly mobile and life is no doubt less than ordinary for many, with an array of known population health, education and justice related problems specific to the poor demographic.  Communicating this concept to a Cambodian person is incredibly difficult.  The western shade of poverty is not conceivable to third world brains anymore than death by starvation and lack of basic resources can be conceived by a first world brain.  We are all confined by our own “unfathomables”. 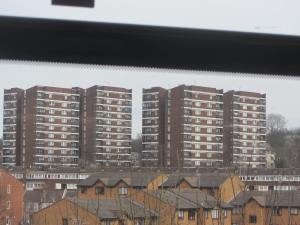